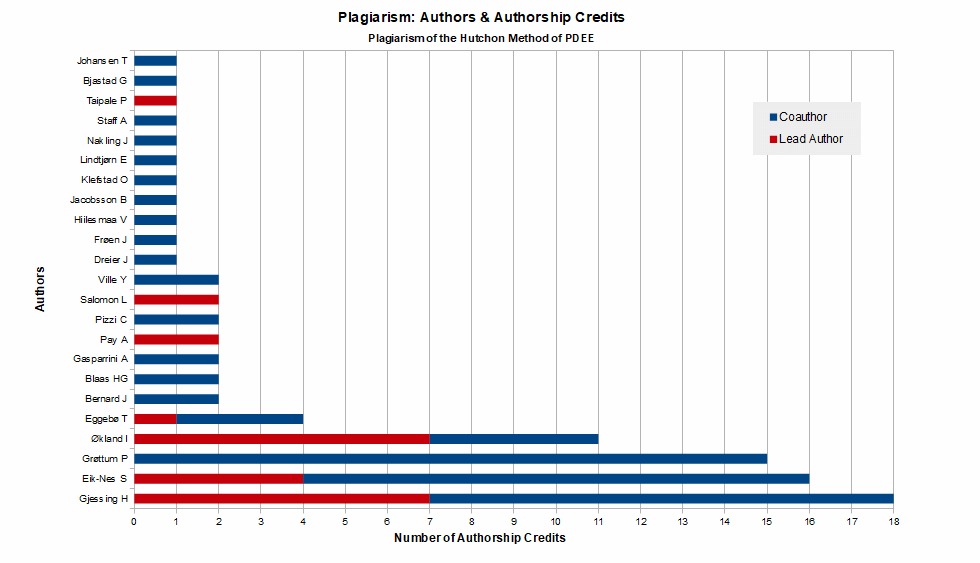 ICMJE Authorship Criteria (ICMJE is commonly referred to as 'Vancouver Group' and ICMJE Authorship Criteria, 'Vancouver rules')
The International Committee of Medical Journal Editors (ICMJE) recommends that authorship be based on the following criteria:
The International Committee of Medical Journal Editors (ICMJE) recommendations regarding scientific misconduct (i.e., data fabrication, data falsification and plagiarism) are identified in the excerpt below. The World Association of Medical Editors (WAME) issued the following statement regarding  research misconduct "including plagiarism, citation manipulation, and data falsification/fabrication, among others."
Coauthors: Research Misconduct
There were 65 coauthor credits (i.e., authorship not credited as lead (or first) author: 89 - 24 = 65); and, with respect to the occurrence and severity of plagiarism and coauthors' responsibilities, included below are 2 excerpts from the 2006 article "Pillory after research fraud – will it help?" ("Gapestokk etter forskningsfusk – vil det hjelpe?") by Harm-Gerd K. Blaas, Kjell Å. Salvesen & Sturla H. Eik-Nes., published in Tidsskr Nor Lægeforen. Interestingly, there was a total of 60 coauthors in the Jon Sudbø case of scientific/research misconduct via falsification and fabrication. Ironically and sadly, 2 of the 3 authors of the article "Pillory after research fraud – will it help?" ("Gapestokk etter forskningsfusk – vil det hjelpe?"), NCFM members Harm-Gerd K. Blaas and Sturla H. Eik-Nes, were, themselves, author and coauthor victims of plagiarism, respectively, in the ﻿﻿Asim Kurjak case﻿ of plagiarism which was described in BMJ by Iain Chalmers (director of the first Cochrane Centre) in his article: "Role of systematic reviews in detecting plagiarism: case of Asim Kurjak" (BMJ 2006;333:594). Interestingly, Sturla H. Eik-Nes wrote a 01.12.2006 response to Chalmers' article titled: "The case of Asim Kurjak - ISUOG Statement of 2002" in which he stated he was responding as the President of ISUOG (1998-2002). Moreover, it its interesting to note the plagiarist Asim Kurjak was integrally involved within ISUOG, as were the plagiarists Sturla H. Eik-Nes, and Yves Ville. This fact serves to make the point that plagiarism and plagiarists operate at all levels, which includes the highest levels of ISUOG and UOG.

The excerpts below were taken from the article" "Report: Scientific misconduct v / Harm-Gerd Blaas" authored by Nasjonalt Senter for Fostermedisin, St Olavs Hospital, Universitetssykehus i Trondheim, which Sturla H. Eik-Nes headed at the time. Again, Harm-Gerd K. Blaas and Sturla H. Eik-Nes were, themselves, author and coauthor victims, respectively, of the Asim Kurjak case of plagiarism. Nevertheless, Blass and Eik-Nes appropriated and plagiarized Dr. David J. R. Hutchon's original idea and method, the Hutchon Method of Population-based Direct EDD Estimation (PDEE), Hutchon 1998. Specifically, the first instance of plagiarism was within NCFM Snurra Group's publication of Eik-Nes et al. 2005: "OC20.01: Predicting remaining time of pregnancy—a new approach to the prediction of day of delivery". However, the first known instance of plagiarism of Dr. Hutchon's original idea and method resulted from a recognized collaboration of NCFM Snurra Group with Pekka Taipale and Vilho Hiilesmaa of Finland. Strangely (or strategically), Sturla H. Eik-Nes did not seek an authorship credit of the paper which resulted from this collaboration: Taipale & Hiilesmaa 2001: "Predicting delivery date by ultrasound and last menstrual period in early gestation".

Magne Nylenna on Research Misconduct & Scientific Fraud in Norway
​Magne Nylenna opened his article "Forskningsfusk i stort og smått" ("Research fraud in large and small")  [via reference (17) above] with a clever use of the classic W. C. Fields line from the movie, My Little Chickadee (1940), in which Fields starred alongside Mae West. Magne Nylenna opened his article "Research misconduct: lessons to be learned?" regarding the Jon Sudbø case of research misconduct via falsification and fabrication.   Jon Sudbø was a Norwegian dentist and physician found to have falsified and/or fabricated data for his PhD thesis and most of his research papers.
Individual & Institutional Responsiblities
Sigmund Simonsen opened his article "Playing by the rules - Scientific misconduct in a legal perspective" by making the point about individual responsibility and institutional responsibility with respect to the Jon Sudbø case.
Lessons Learned from the Jon Sudbø Case
Anders Ekbom was quite specific about his take on the Jon Sudbø case in his article: "Investigation of scientific misconduct – some personal reflections"
Magne Nylenna revisited the subject in 2017 with a letter published in Tidsskr Nor Lægeforen:"Ten years after the Sudbø case" ("Ti år etter Sudbø-saken")
Research Handbook
In the wake of the Jon Sudbø case of research misconduct the research administrations at Oslo University Hospital (OUH) in collaboration with Haukeland University Hospital (Bergen) published a research handbook appropriately titled "From Idea to Publication: THE RESEARCH HANDBOOK", 7th EDITION 2017. ​
Jon Sudbø case: "8.3 The Commission’s concluding remark"​ (p. 121)
"In conclusion, the Commission will remark that although this case has been very serious and tragic for individuals, institutions and Norwegian research more generally, there appears to be a remarkable will internally in the research community to turn the case around to something positive – something everyone can learn from. Frequent contributions to newspapers, debates and seminars have shown an already great involvement in many research environments. The Commission will support such a way of thinking, and at the same time caution against sweeping this extraordinary case under the carpet – because it is extraordinary – and just continue as before. On the contrary, this case provides an opportunity for a thorough discussion of different sides of the norms related to good research practice. The research community must make an all-out effort to make plain research’s traditional ideals of honesty, thoroughness, trustworthiness and openness. And this must be made visible to the general public so that the population’s trust in Norwegian research is maintained and reinforced." (Source: "Report from the Investigation Commission appointed by Rikshospitalet – Radiumhospitalet MC and the University of Oslo January 18, 2006" Investigation Committee appointed on 18 January 2006: Anders Ekbom (Chair), Gro E M Helgesenj, Aage Tverdal, Tore Lunde, Stein Emil Vollset, Sigmund Simonsen (Secretary); Report Submitted 30 June 2006)

"Unintentional Plagiarism"
Much has been written on the subject of "unintentional plagiarism," however, the conclusions are always the same; it is still plagiarism. Confusing intentions and efforts with a result that is plagiarism is a mistake; a mistake for which there is a plethora of excuses, because results which are plagiarism have both seen and unforeseen, downstream consequences; consequences which in the field of medical research, can contribute to, and cause increased medical risks, critical medical mistakes and grievous medical harms. LailasCase.com proves this.

"Personal motives as the reason for misconduct and fraud" (p. 147)
"There is an increasing pressure to publish ("publish or perish"), particularly within biomedical disciplines in which it is crucial for researchers to be the first to publish important findings. Publications have also become the basis of a merit system, both in terms of personal career and with respect to allocation of research grants. However, the pressure to publish cannot fully explain why a few researchers deliberately choose to commit fraud in research, for example fabricating research data. It is likely that personal characteristics of the individual researcher also play a role. For example some researchers exposed of committing fraud have been found to repeat their fraudulent behavior (in research). The desire for "honor and glory" may also represent a motivational factor that can lead to research fraud." (Source: "From Idea to Publication: THE RESEARCH HANDBOOK" 7th Edition: 2017" [Norwegian: "FRA IDE TIL PUBLIKASJON: FORSKNINGSHÅNDBOKEN") Editors: Annetine Staff & Karin C Lødrup Carlsen; Coauthors: Harald Arnesen, Anne Grete Bechensteen, Anne Flem Jacobsen, Ernst Omenaas. Published by Oslo University Hospital in collaboration with Haukeland University Hospital)​

More on Publish-or-perish Realities
As articulated above, the stresses of 'publish or perish' career realities can induce aberrant behaviors which result in academic misconduct and research misconduct. Included below is the abstract of "Publication pressure and scientific misconduct in medical scientists" from the Journal of Empirical Research on Human Research Ethics.
Plagiarism: Publications
Included below, in chronological order, are the known publications resulting from the appropriation and plagiarism of Dr. Hutchon's original idea and method, the Hutchon Method of Population-based Direct EDD Estimation (Hutchon, 1998). There are 24 known publications with 88 authorship credits among 23 authors. Note: Funding, Institutions and Acknowledgements are included if available from the publication.